Sunday, April 5:  After I get off the metro in Hong Kong Central, I head directly to the Peak Tram terminal.  Luckily the skies are a perfect blue for a climb to Victoria Peak, known simply as The Peak.  I crane my neck to admire the skyscrapers looming over me. 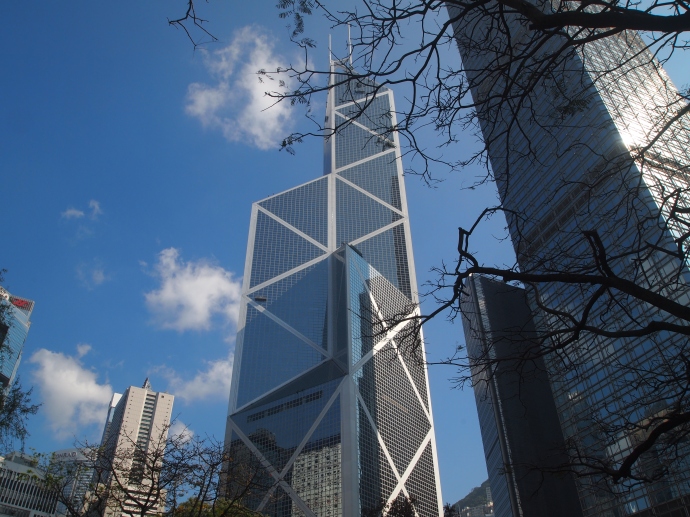 Walking through Central to get to the Peak Tram

I pass by St. John’s Cathedral, officially The Cathedral Church of St. John the Evangelist, quite an anomaly in the midst of these modern skyscrapers.  The Anglican church is the oldest surviving Western ecclesiastical building in Hong Kong, and the oldest Anglican church in the Far East; it had its first service on March 11, 1849 and was declared a Hong Kong monument in 1996.

Finally, I get to the Peak Tram terminal.   The entrance seems to be on the right side of the road, but I’m told to go across the street and get in line there; I join a Disneyland-esque type queue that snakes around and around and seems to be moving at a turtle’s pace.  I get into the queue. I wait. And wait. And wait.  For about 40 minutes I creep forward in the line and I’m still only about halfway through.

At one point, when I reach the side of the queue nearest the street, a Hispanic-looking woman says to me, “Come with me!  You!!”  I look around.  Who’s she talking to?  She looks familiar.  She points directly at me. “Yes, you!  Come with me!”

I happily go under the rope and follow her as she escorts me across the street into the line on the other side, bypassing the other half of the queue I was originally in.  “Don’t you recognize me?” she asks me. “I sold you the Big Bus ticket yesterday.  You don’t have to stand in that queue if you have a Big Bus ticket! How long have you been standing in that line?”

“You should already be at the top of the Peak!”

That’s what I get for half-listening to her when she explained yesterday morning the benefits of the Big Bus Ticket, which cost me a small fortune.

the infernal line at the Peak Tram

So, magically, I’m in the queue across the street, which seems to be nearly as interminable as the original queue.  However, in this queue, at least I know the end is in sight.  I can even spot a glimpse of the tram over all the heads. 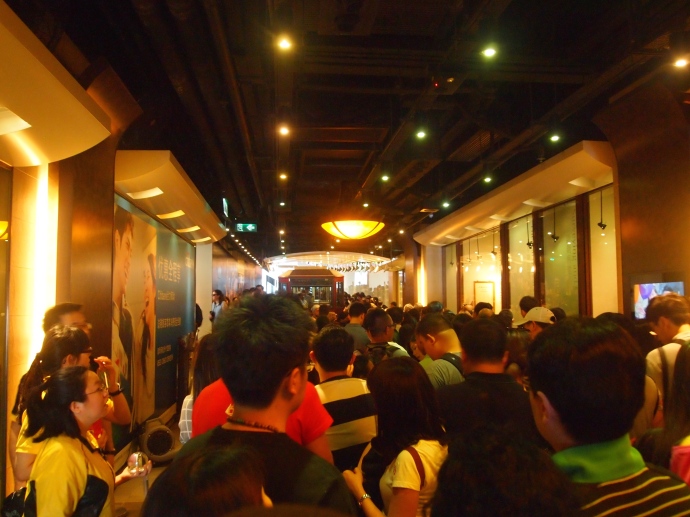 The line continues once we cross the street

Little by little, I move to the front of the line.  It looks like I’ll make it after all.  I can’t tell you how many times I thought of giving up and leaving while standing in that line.  Finally, I see the tram leave, and then I’m at the front.

there goes the tram, without me, again!

Everyone pushes and shoves onto the tram, all of us impatient from the long wait.  We crowd inside and the doors close and we’re off.  Voila! 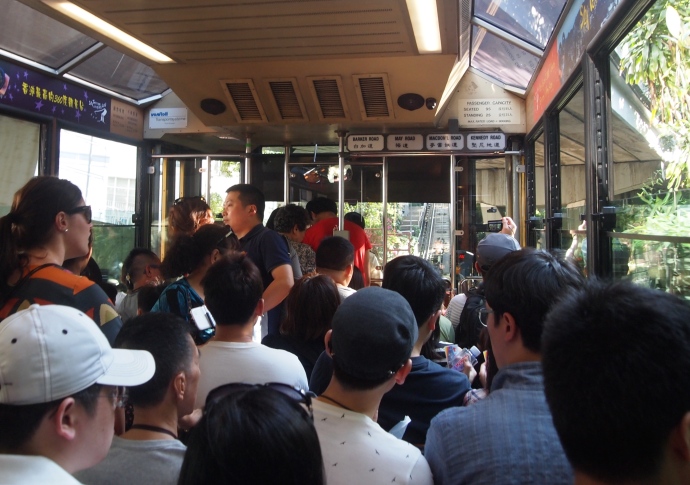 on the tram at last!!

Out the window of the tram, which is actually a funicular railway, we can see our first views of Hong Kong from above.  The tram track is incredibly steep, climbing 386 vertical meters in about 8 minutes.  The tram is not that big, so that’s why the long wait.  Each time, it must go up and come down, as there is only one track and one tram.

views from the tram

view from the tram

We reach the top, where I snap a picture of these colorful wheels, and then I’m carried along with the crowd out into the sunshine.

getting off at the tram terminal

And finally, we have a view.  There, spread out beneath us, is Victoria Harbour, Hong Kong Central, Kowloon, the green peaks of the New Territories, and who knows what else. 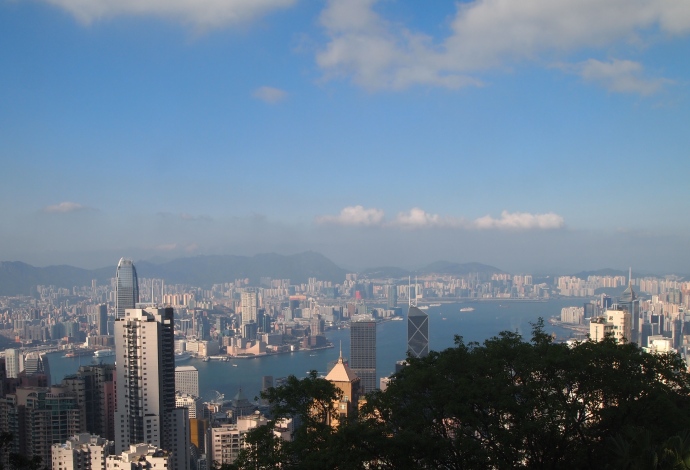 first view from the peak 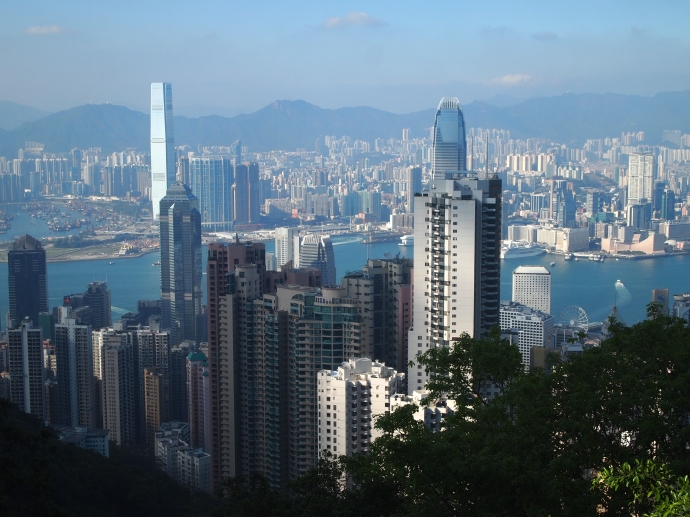 I’m so lucky that it happens to be a gorgeous day with clear views. I’ve heard many people say they’ve visited Hong Kong when the visibility has been almost nil.

Hong Kong from The Peak 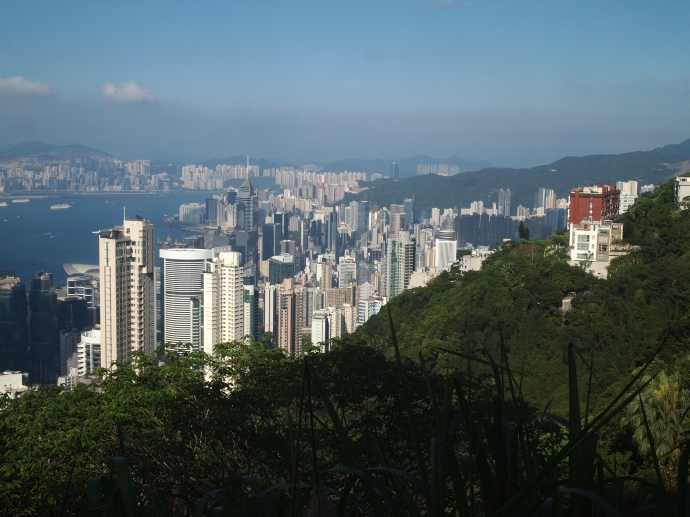 Hong Kong from The Peak

Looking to the west

I’m also glad that I came here in the late afternoon, as the light is like warm honey poured over the skyscrapers.

view of Hong Kong Central and the International Finance Center

Hong Kong in the shadows

Looking to the west, I can see the harbour on the Kowloon side, with its multitudes of boats.

You can actually walk through the forest on this path atop The Peak.  I take a stroll, but I’m most interested in eventually finding the walkway down, and this isn’t it.

path on The Peak

From this angle, I can see the crowds on a pretty pavilion jutting out over the Peak, and above it, people standing atop the Peak Tower.

a pavilion with a view 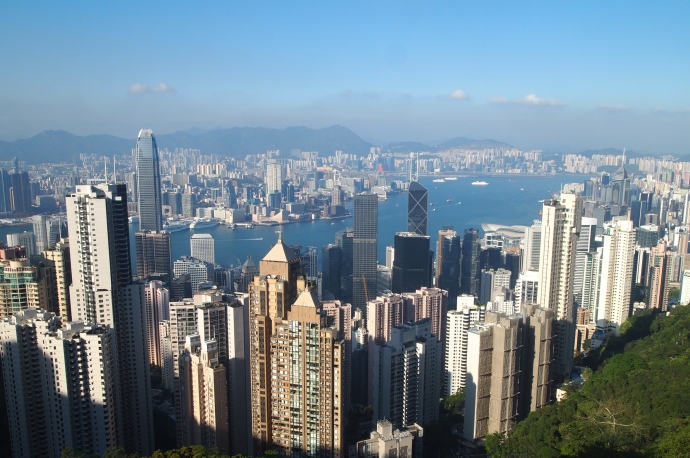 The views are stunning, and it was definitely worth waiting in that long line to get up here. 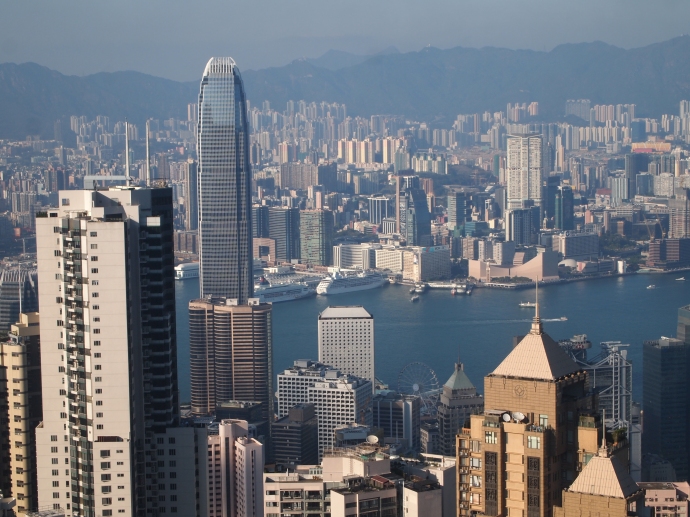 view of Hong Kong from The Peak

Eventually, I decide to stop at the Starbucks for an iced coffee and to use the wi-fi to put some of my pictures on Instagram.  Across from the Starbucks, I see the Peak Tower, with its unusual cross-sectional wok shape.  Looking like an alien spaceship from the outside, it’s actually topped with a viewing platform and filled with a shopping mall and coffee shops.

After I take my rest, I take numerous escalators to the viewing platform at the top of the Peak Tower, and this is what I see.

Kowloon across the harbor 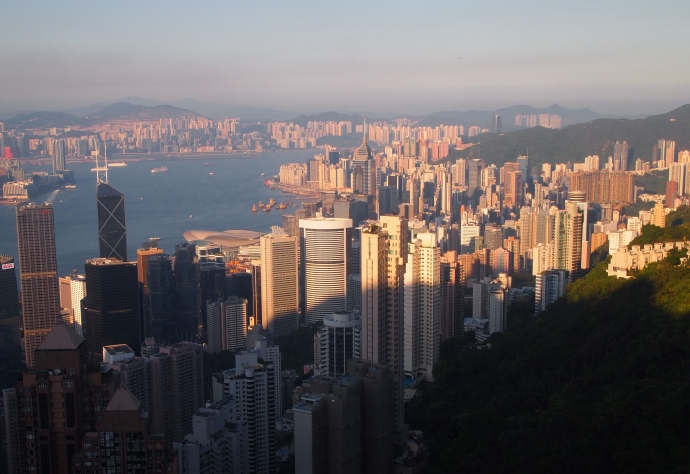 Hong Kong from the Peak

view looking down the hillside of The Peak 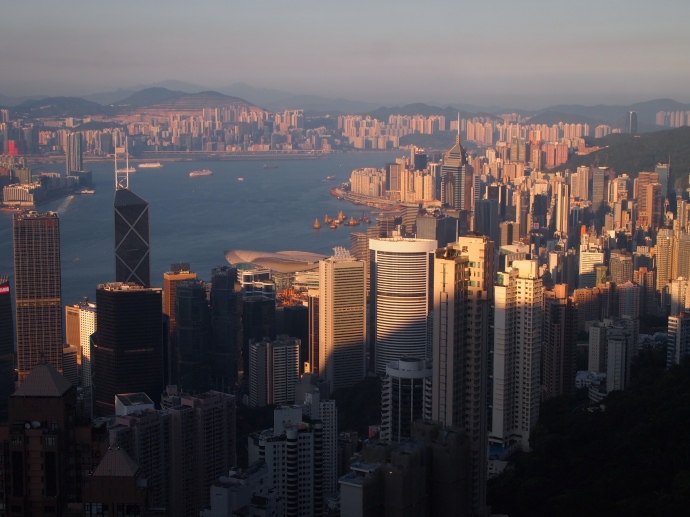 Hong Kong in the waning light

I can see the sun is getting low in the sky, and after seeing the lines to go back down on the tram, I determine I am going to walk down the Peak.  It takes me awhile to find the pathway down, the Old Peak Road, along the far side of the Peak Tower.  I take a last look at the Peak Tower before I begin my descent.

The Peak Tower from below

I pass some joggers and walkers going both up and down the Old Peak Road and I don’t know how on earth they are actually running up this steep walkway.  I’m almost running headlong, it’s so steep.

the steep trek down

Finally, after about 40 minutes, I make it to the bottom.  My goal is to reach the Mid-Levels Escalator, but instead I pass by the Zoological and Botanical Gardens, closing up for the day.  People I meet along the way tell me the Mid-Levels Escalator is quite a long walk, and by now, after having been to Lantau Island and the Peak, my legs are exhausted.  Instead I head toward Central and the metro. 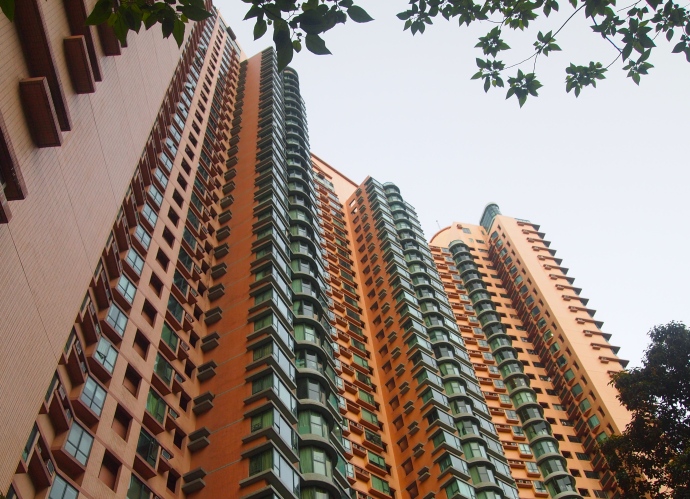 skyscrapers at the bottom

Hong Kong Central as the lights are dimming

I’m starving and tired by this point, and I just happen to see a little Turkish place as I stand on a street corner trying to determine what direction to go.   It’s called Tava, and there I order some lentil soup and a fried halloumi cheese salad.  I sit in the window and watch the iconic Hong Kong taxis zipping by on the street. It’s the perfect ending to a fantastic day.

A Turkish meal at Tava

After dinner, I feel rested, so I make my way back to the metro and take it directly back to the Yau Ma Tei stop, not far from my hotel.  After resting a bit there, I intend to go out to explore the Night Market, just a couple of blocks from my hotel.

Yours truly, aka Cathy

Return to Northern Virginia from L.A. :-)

A German Expat's Life in Fredericksburg/Texas

inspired by the colours of the land, sea and sky of Cornwall

Let Me Bite That

Can I have a bite?

exploring New York City one adventure at a time

The World according to Dina

Notes on Seeing, Reading & Writing, Living & Loving in The North

Potato Point and beyond

A blog full of humorous and poignant observations.

The Eye of a Thieving Magpie

My view of this wonderful and crazy life - as I travel and explore.

From London to New York, living in an expat daze

Photography is a constant travel to new places

Never cease to explore and tell!

Insanity at its best!

Travels in the Middle East and beyond

"Wherever you go, go with all your heart " Confucius.