Monday, April 20:  This evening, I go with Mari, the Finnish lady I met on our tour of the Terra Cotta Warriors, to the Tang Dynasty Palace to see a music and dance show.

Since it was established in 1988, the Tang Dynasty Palace and the Shaanxi Provincial Song & Dance Troupe have cooperated to stage the Tang Dynasty Music and Dance Show.  The venue holds about 650 diners who are served a variety of dumplings and other Chinese dishes. 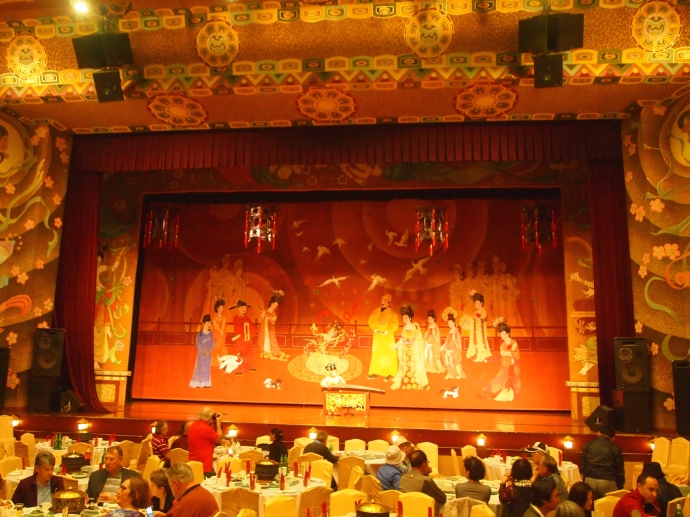 The stage at the Tang Palace Dance Show before the show

Mari and I enjoy the dumpling dishes very much, although we still feel a little hungry when all is said and done.  We can’t help but feel a little rushed by the wait staff who obviously must keep the food moving along in order to clean up before the performance starts.  We have bought a bottle of red wine to share; luckily, we can enjoy our drinks throughout the performance. 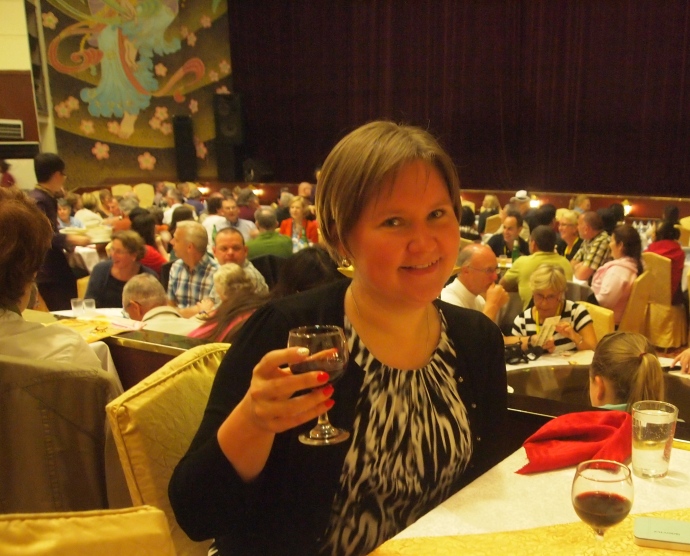 Mari from Finland. She lives and works in Beihai.

me at the Tang Palace Dance Show

The performance is composed of ancient music and dance. The city of Xi’an, formerly known as Chang’an, was the imperial capital during 13 dynastic periods. Of these, the Tang Dynasty (618 – 907) was the most sophisticated of all. The Tang Dynasty Music and Dance Show showcases this prosperous and peaceful ancient society (TravelChinaGuide: The Tang Dynasty Palace (Tang Yue Gong)). 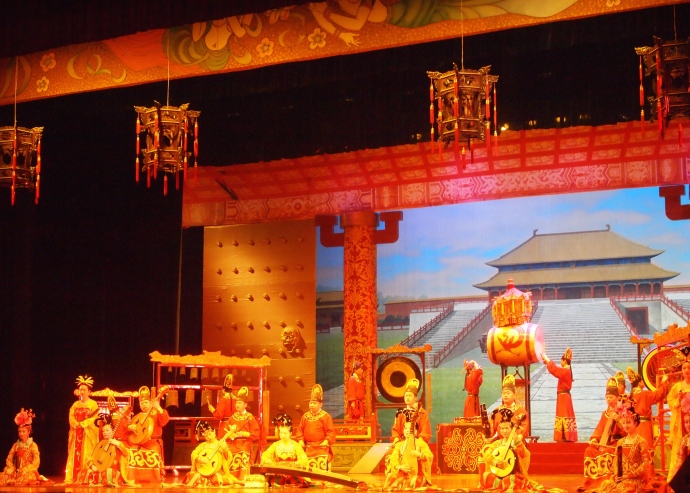 These folk dances were originally performed as prayer rituals for a good harvest or a prosperous life.  Over thousands of years, the dances developed from a few simple postures or gestures into whimsical and elegant performances, reaching a peak during the Tang Dynasty.

Unlike some other regimes, the Tang was open to outside influences and was willing embrace the best of various art forms, not only from past dynasties but also from ethnic groups in northwestern China as well as central and western Asia. By combining poetry and stunning costumes with singing, dancing and the skillful playing of musical instruments, the modern presentation immerses viewers into ancient China’s history, brilliant arts, distinct traditions and customs (TravelChinaGuide: The Tang Dynasty Palace (Tang Yue Gong)).

I’m especially mesmerized by the enchanting stage sets and the long and elegant sleeves of the dancers’ costumes, which float dreamily and hypnotically throughout every dance. 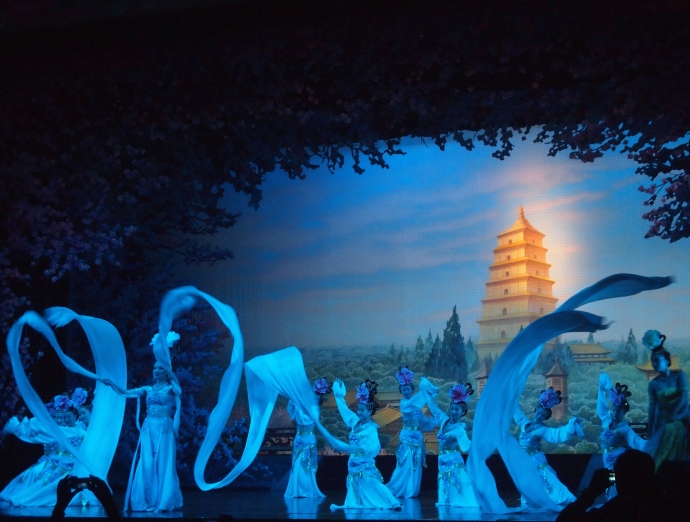 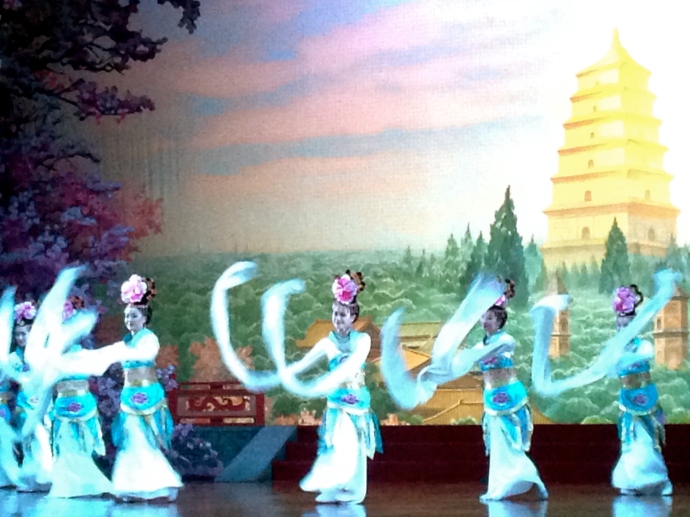 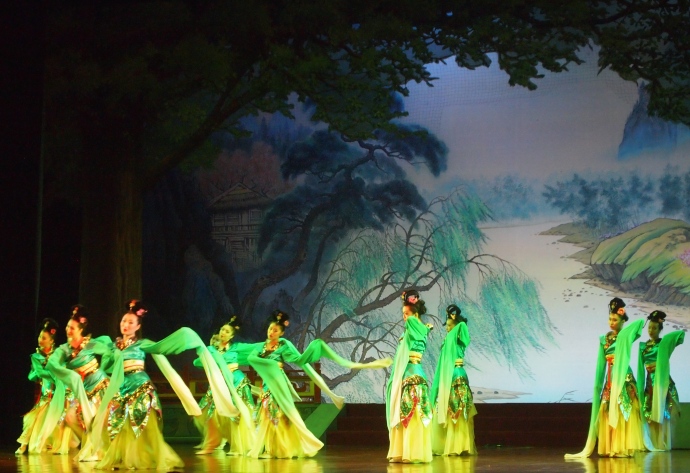 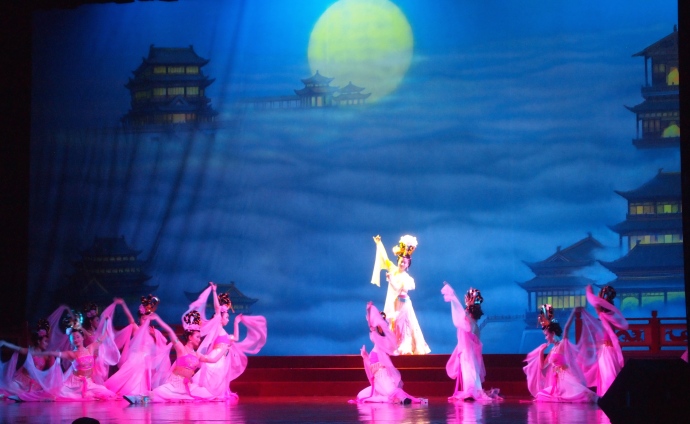 dance to the moon 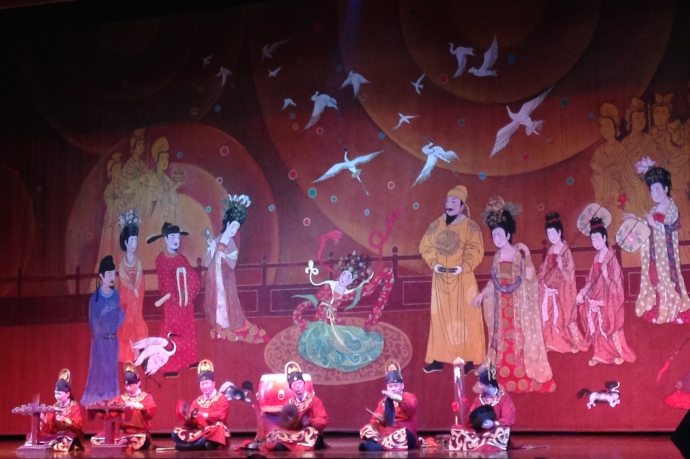 The night’s performance is charming and vibrant, and it’s especially enjoyable having Mari’s company.  We part ways after exchanging numbers and WeChat information, with promises to meet at some later date in her hometown of Beihai.

Tomorrow morning, at the crack of dawn, I must fly back to Nanning for another week of work. 😦

Yours truly, aka Cathy

Return to Northern Virginia from L.A. :-)

There was an error retrieving images from Instagram. An attempt will be remade in a few minutes.

A German Expat's Life in Fredericksburg/Texas

inspired by the colours of the land, sea and sky of Cornwall

Let Me Bite That

Can I have a bite?

exploring New York City one adventure at a time

The World according to Dina

Notes on Seeing, Reading & Writing, Living & Loving in The North

Potato Point and beyond

A blog full of humorous and poignant observations.

The Eye of a Thieving Magpie

My view of this wonderful and crazy life - as I travel and explore.

From London to New York, living in an expat daze

Photography is a constant travel to new places

Never cease to explore and tell!

Insanity at its best!

Travels in the Middle East and beyond

"Wherever you go, go with all your heart " Confucius.